Bench pressing is a very popular workout among bodybuilders and weightlifters due to its effect on the whole upper body. Bench pressing works many muscles across three major muscle groups, the chest, arms, and shoulders.

The bench press is also a very versatile workout with many different variations that focus on certain muscles in these three muscle groups.

One of these variations is the incline bench press, it is one of the most popular variations of the bench press and can be useful when building muscle in the upper body. 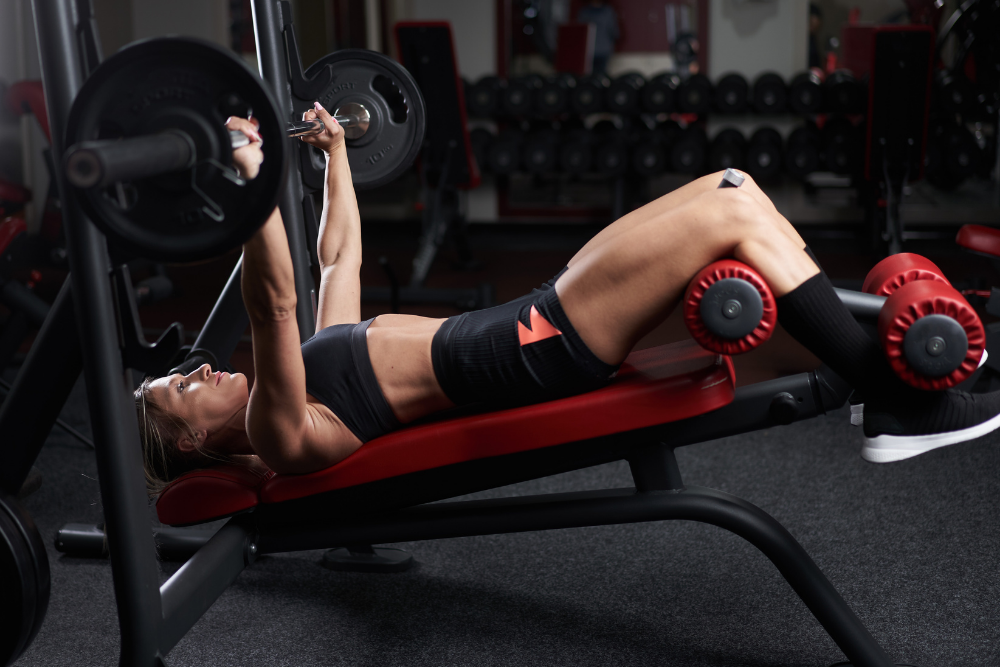 What Muscles Does An Incline Bench Press Work?

There are three main muscle groups that the bench press works, the chest, arms, and shoulders.

The bench press only works certain muscles in these categories, particularly in the arms and the shoulders, making it one of the best overhead press alternatives. The incline bench press focuses on a few of these muscles to give the most effective workout to certain muscles.

The chest is the most prominent muscle when bench pressing. The chest is made out of one large muscle called the pectoralis major but is more commonly known as the ‘pec’.

The pec is split into two muscle heads, the clavicular head is the upper muscle of the chest that connects your upper arm to your collarbone.

However, in an incline bench press, is it the clavicular head that works a lot more than the sternocostal head.

When bench pressing, you’re using your arms to push the bar up in front of you, therefore working the muscle group. The arms are made up of three major muscles, the biceps, triceps, and forearms.

If, when lifting you tighten your forearm, you will be able to train the forearm with a bench press also.

The shoulders are also made up of three major muscles called deltoids or ‘delts’.

During a traditional bench press, only the anterior deltoid is worked as it helps the pec and the tricep to bring the arms out and up in front of you.

How To Perform An Incline Bench Press

So, how do you correctly perform an incline bench press to make sure that you effectively work those muscles? Start with adjusting the incline bench at an angle of around 30 - 45 degrees.

Sit on the edge of the bench and make sure your feet are planted firmly on the ground in front of you, then lie back on the bench making sure that your back is straight and your spine is neutral.

Grip the bar with your hands slightly wider than shoulder-width apart and facing forward with your thumb wrapped around the handle.

Slowly lift the bar off of the rack and into the air until your arms are straight and your elbows are locked. The bar should be slightly above your eye line when it is at its peak.

Then slowly bring the bar back down until it touches the top of your chest or comes very close to touching the top of your chest. Your elbows should be kept out to the side. Then repeat this process for the number of reps you feel comfortable with the weight that you have.

We recommend that when you are performing an incline bench press for the first time, you perform it with very low weight or just the bar, as it is much more important to get this form absolutely right before adding weight.

We also recommend that with any bench press variation you have a spotter on hand to help you if needed, no matter how experienced you are with the bench press.

Your bench should still be at an angle of 30 - 45 degrees, feet planted firmly on the ground, your back straight and spine neutral.

Hold the dumbbells to the top of your chest with your hands facing forward and slowly extend each arm until the elbows are locked and the arm is straight.

Then carefully lower the dumbbells into the starting position, making sure that your elbows are out to the side. By using dumbbells instead of a bar, you are reducing the injury risk by having separate control over each of the dumbbells, you can also keep a close eye on which muscles are training on each side of the body and whether one of the sides is weaker than the other.

If you want to focus on the upper body workouts then the incline bench press is definitely a workout you should try. Always be cautious when using the bench press and always use the help of a spotter.